Are you still disappointed over the heartbreaking EG loss to C9? Looking for some Hopium to keep you going into the next year? Feeling bored already because LCS is over?

Well, I have some good news for you!

The EVIL GENIUSES ACADEMY team is back for PROVING GROUNDS! Our talented prospects will be soon providing us with some banger #LIVEEVIL games & filling the EG-shaped void in our lives.

What? You don't know anything about EGA yet? Allow me to introduce you to your new favorite team.

Why you should be excited about EVIL GENIUSES ACADEMY

In case you are really, really out of the loop, I should start by telling you that Evil Geniuses has spent this year working on development in multiple levels. From a number of collegiate initiatives to a successful Amateur team, they are going above and beyond to make sure they are finding and nurturing talent.

It's with that philosophy in mind that the EGA squad was put together.

Promoting Danny is just the beginning of it, as you can hear in this clip from The Dive. 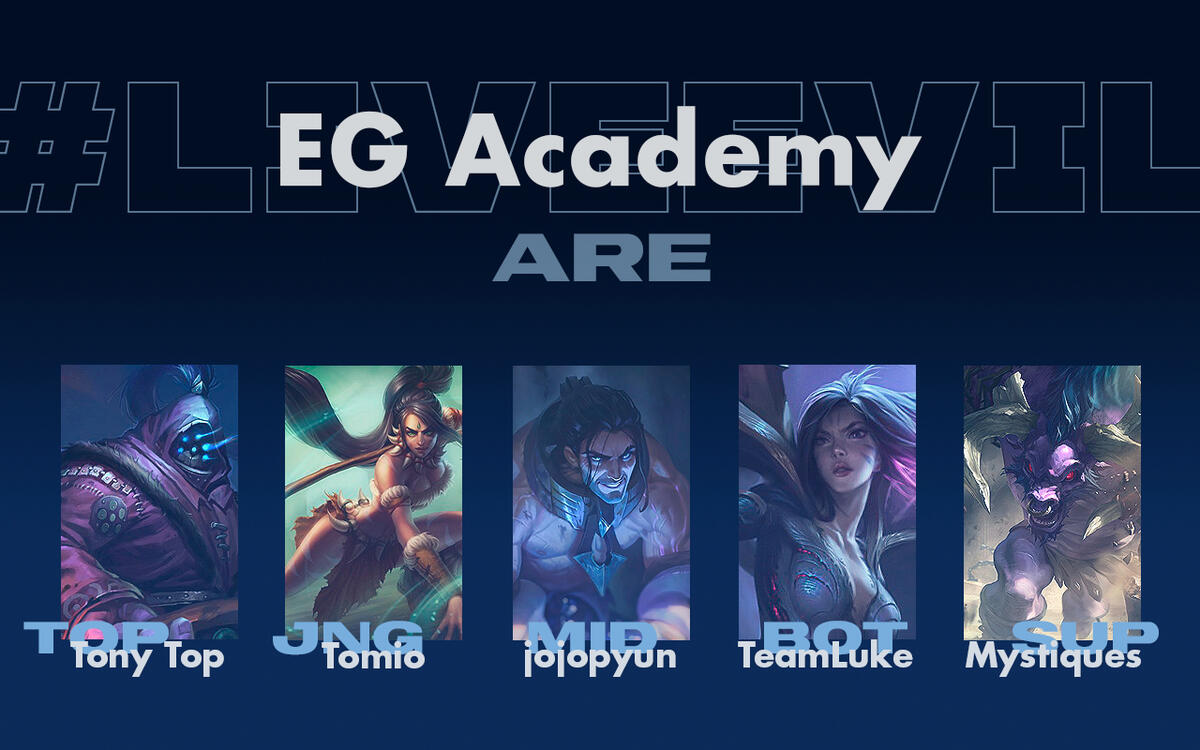 EGA has some of the most exciting new talent in Academy (shoutout to Empyre who keeps getting us Ws). This is not my opinion, it's just facts!

If you have never heard of our Academy players, let me introduce them one by one. 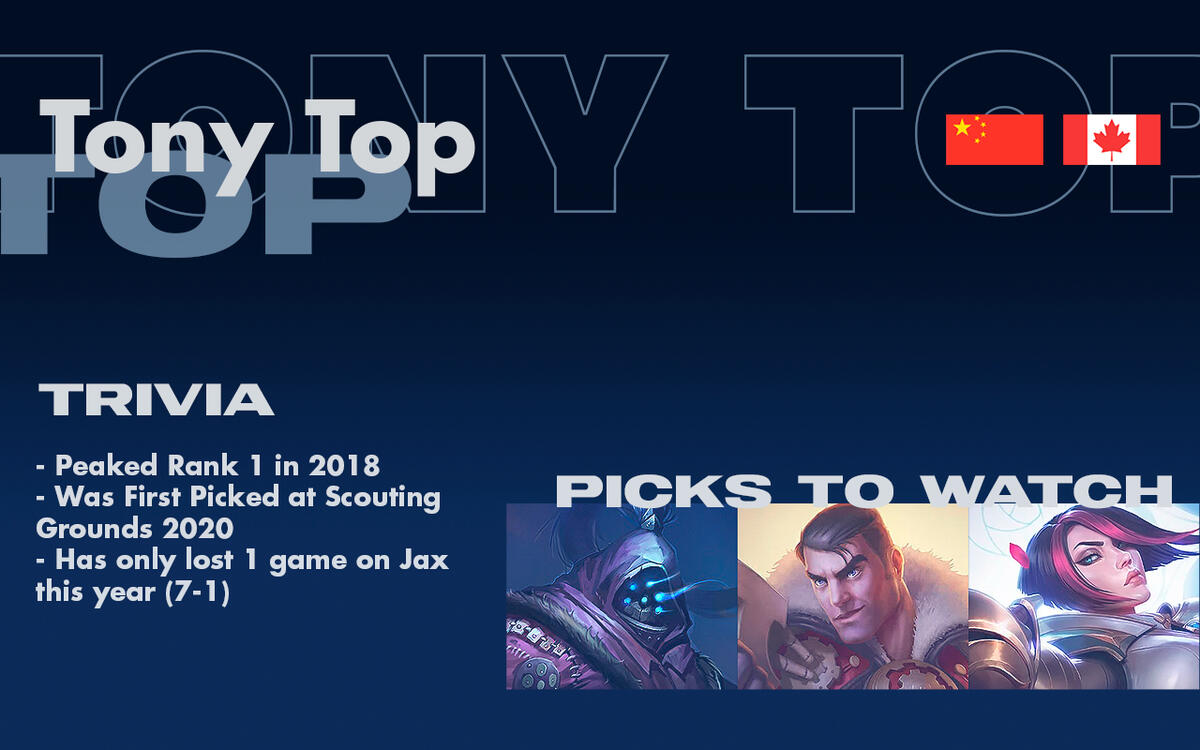 Tony loves skill checking and dueling split pushers (he's called Anthony Top Lane Kingdom for a reason) and is willing to throw down the gauntlet against any lane opponent, no matter the nameplate. He's a notorious soloq menace and has been in a couple of Amateur teams in the past. During his time in Academy with EG, he has proven to be a valuable secondary threat to jojopyun and Contractz's dynamic carry duo.

Tony is most famous for his Jax mastery. While EGA were seemingly careless about dropping a game or two (or half of them, even...), it felt like whenever Jax was picked for Tony the game was already decided in their favor. Even in hard matchups, such as going against a Riven piloted by V1per, he managed to pull out the wins for the team on this pick. He also showed the ability to do mid lane swaps successfully (and to become, as we say, Tony Mid), a feature that the LCS squad was notorious for pulling off consistently during this summer. 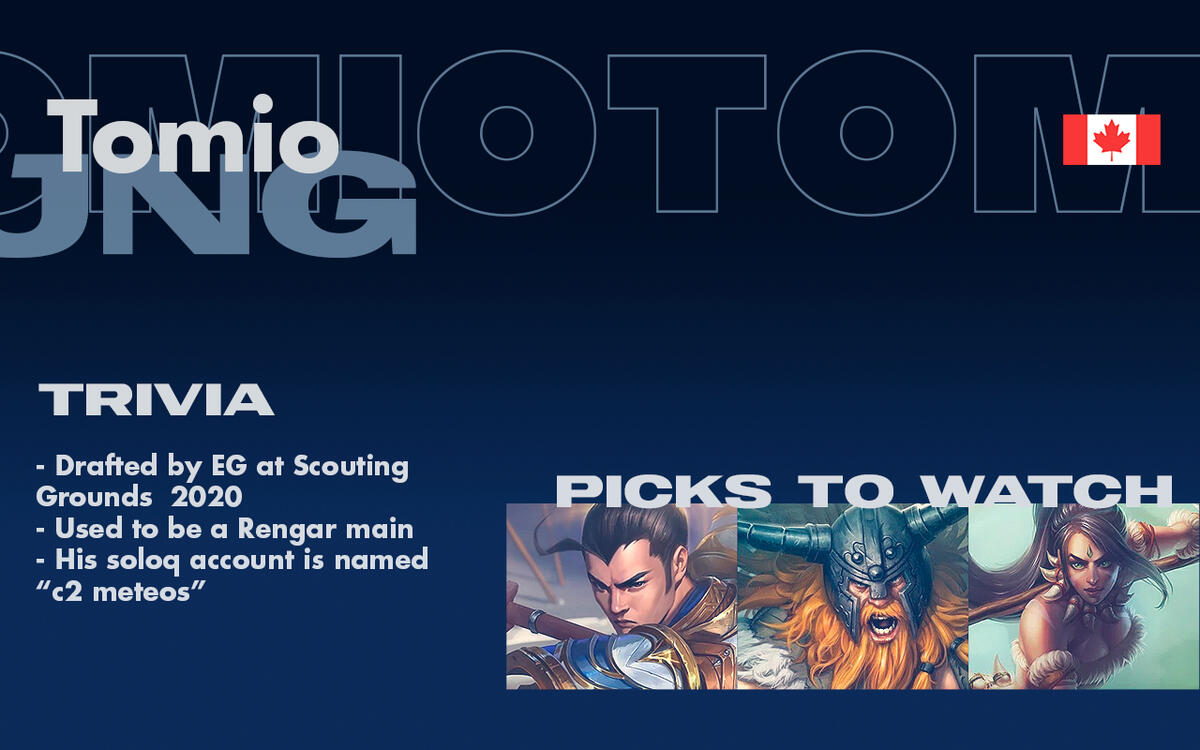 For most of the year, EGA had a different jungler. With Contractz, considered almost unanimously the best in his role in Academy, they had a consistent win condition and his departure is a big deal. That being said, we really wouldn't have anyone else to come and take over after him!

Tomio was not just Evil Geniuses Prodigies' jungler, he was their main star after Danny's promotion. An aggressive, in-your-face type of player, Tomio makes games about him and you will love to see it when he succeeds (also known as the "Tomio diff"). He has a mean pocket Nidalee and thrived on AP junglers most of the year, putting up big damage numbers for his team.

Tomio debuted with EGA for their playoff games against C9 and had a decent showing, but it didn't look like he was yet fully integrated. I believe by the time Proving Grounds comes he will be more than ready to make a statement with his gameplay.

This is more of an EGP highlight but don't mind me. (Audio source.) 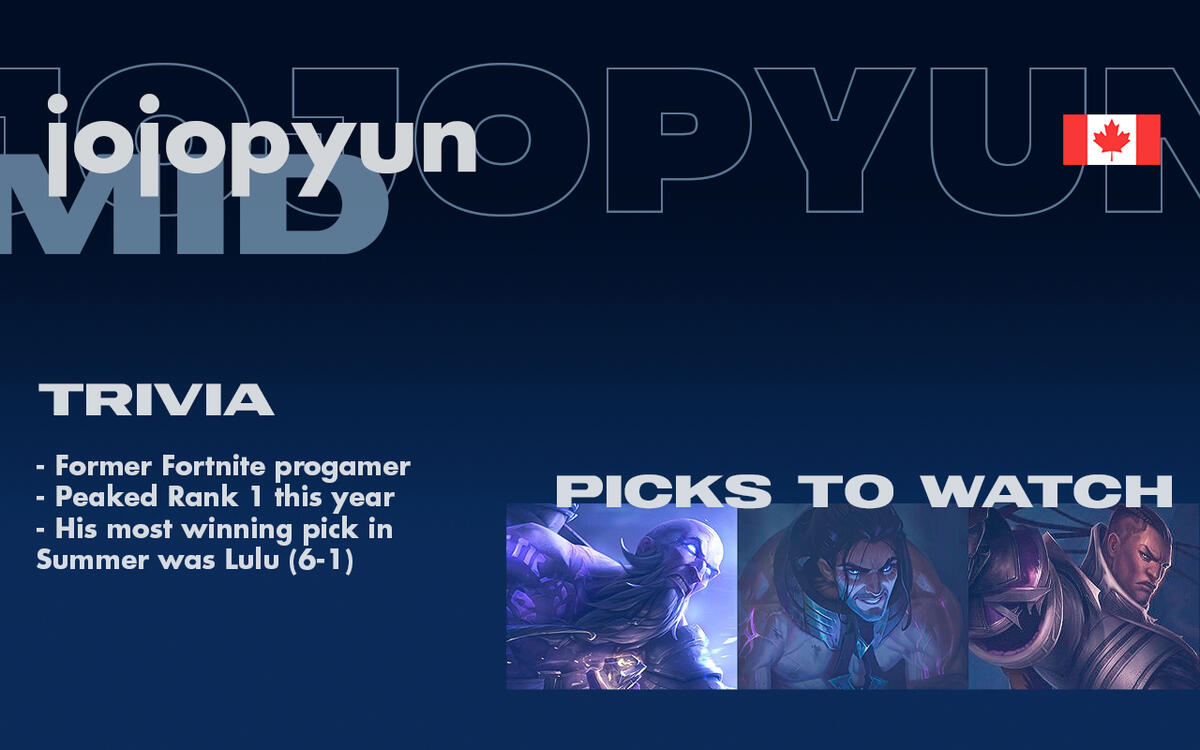 Our lord and savior, the chosen one, the unkillable demon prince, the hope of NA, the crown jewel of EG... A star in the making, jojopyun, aged 16, is arguably the hottest upcoming NA prospect in the entirety of Academy and Amateur.

Jojo will play for lane from the moment the game starts, he will challenge his opponents to outskill him, he will taunt them by spamming emotes... And maybe he will come out on top, and be that giga fed 17 kill Akali that you dread to see as the enemy in your soloq games. But he could also be the 1/11 Lee Sin that you are stuck with in your team (and that you will report for intentionally feeding when the game is over). He's learning his limits, let's put it that way.

I bet you thought I was exaggerating. And yes, these were the same day.

The emotes, they really get to you sometimes... (Audio source.) 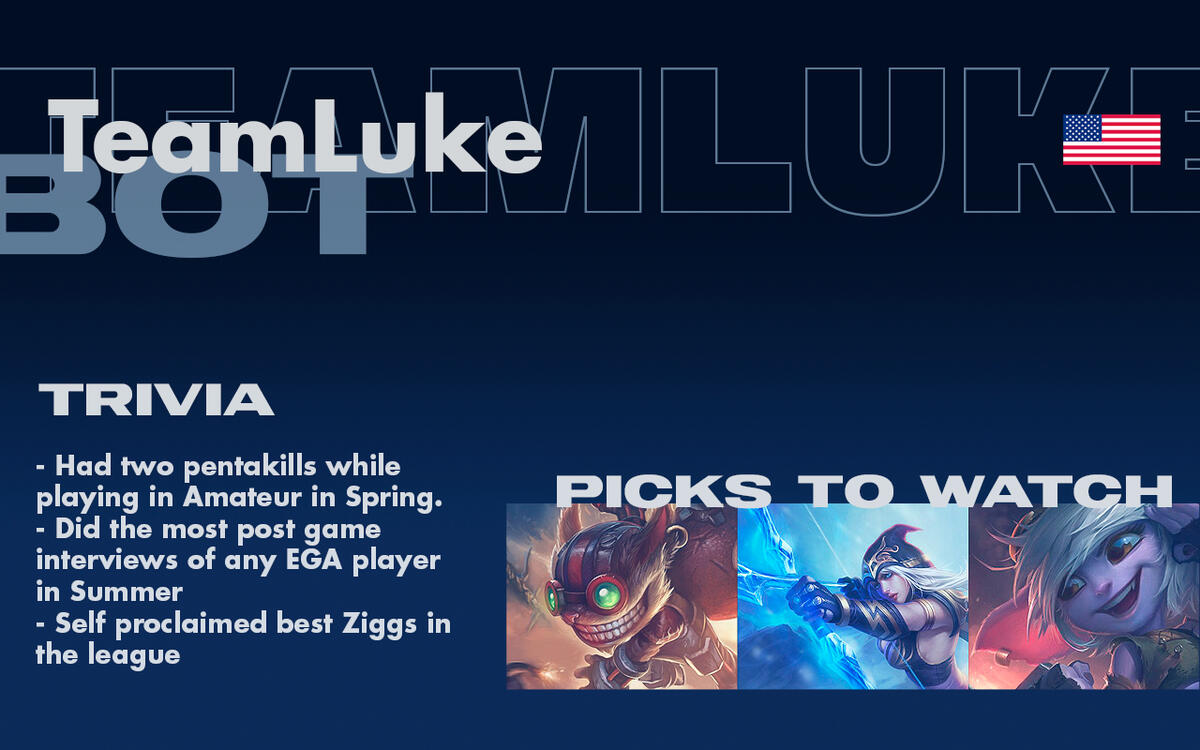 After some movement of ADCs between teams in the mid-season, EGA landed on having TeamLuke added to the roster. Luke is a hot and coming bot laner who was the main carry threat of Amateur team Wildcard Gaming, famous for his aggressive carry picks like Samira and Kai’Sa (just like our beloved Danny, his then rival).

Luke didn't have the smoothest of transitions he when first started in EGA. He has talked about having to adapt after moving from a team in which he was very much played around, to a team in which he's more often than not playing weakside. He’s increasingly become better at fulfilling his designated role on the team. It is hard for Luke to stand out in a team full of psychopaths, but it would be a mistake to underestimate the value he brings to EGA. 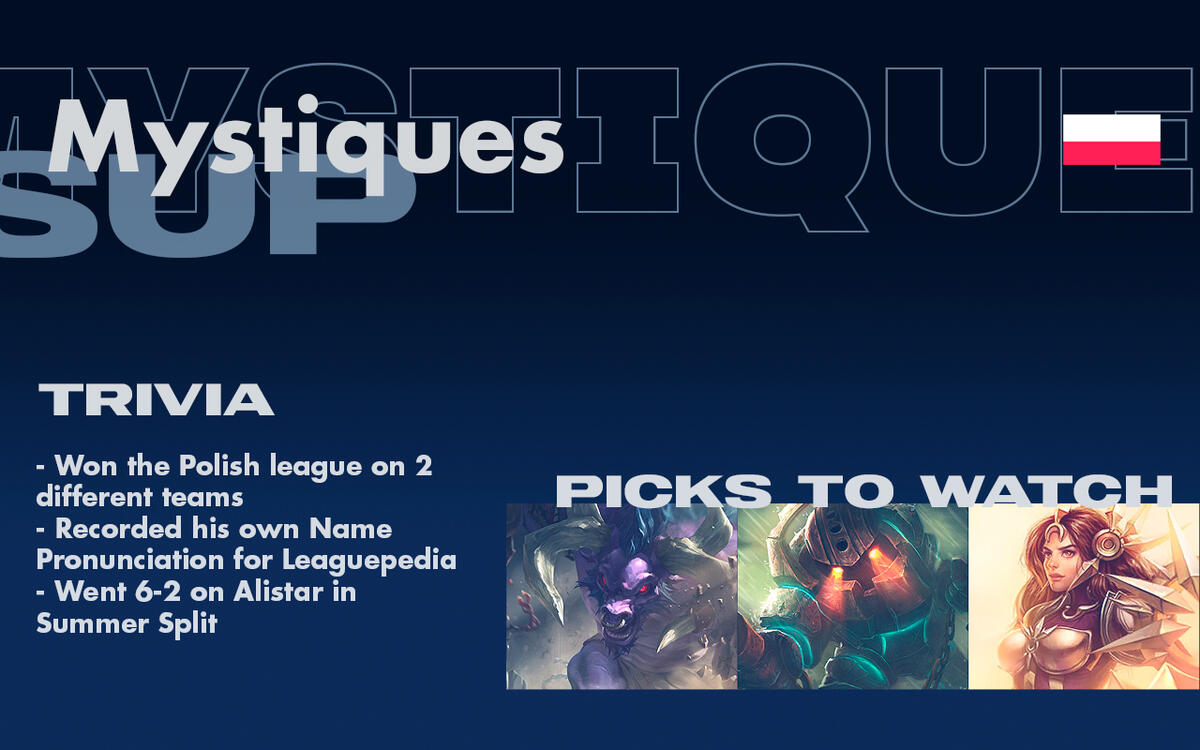 Mystiques is a veteran voice in EGA. He brings experience, knowledge and hopefully some sanity to a team full of rookies that are overflowing with talent but need some guidance. He’s been in the scene for a long time, having joined his first serious team in 2014. He played in LEC in 2019, as the support for Excel Esports and has being a top performer in the ERLs since.

Just like Luke (and IgNar, if you ask me...), he often flies under the radar because the rest of the team is just going too wild. But he does a lot of work for EGA, finding the right roam timings and engages to let everyone else shine.

Beware of his Alistar, the guy is cracked on that.

The staff you know and love*

Former LCS support of Team Liquid fame, Matt Elento, is EGA's coach, and while there’s little I can say to how much he does for them, the fact remains they have been successful in many aspects under his direction. Furthermore, for Proving Grounds, EGA will be benefiting from the failures of the main squad (I'm sorry if that's too harsh, I'm coping...), given that without Worlds to focus on, Peter Dun has been working with them ever since the LCS playoffs ended for EG. As it happened in Spring, many Academy teams will receive the LCS staff buff for PG. However, EGA will be getting help from the very prestigiously awarded LCS Coaching Staff Of The Split and that has to count for something, right?

During Academy Summer, EGA was a team that seemed to be focusing more on development and trying things out than on acquiring wins. In the BO2 system, EGA were the kings of ties, to the point of ending the regular season with a perfectly 50-50 split record of 18 wins and 18 losses. (As I've been saying, people think the LCS squad is "coinflippy", but those guys got nothing on EGA. They are the true masters of the coin.)

EGA finished 6th in the standings and lost their first and only playoff matchup against eventual finalists Cloud9 (a highly recommended and very tense 5 game series). This doesn’t sound very promising, does it? Well, let's go back in time a little. In Spring, EGA surprised everyone by managing to achieve a Top 4 finish at Proving Grounds, after having quite a questionable regular season that accounted for only two wins (small sample size but still...). They took some time to ramp up, having to run a couple of Amateur tournaments to qualify for PG and by that time everyone had started noticing their individual skill and aggressive playstyle.

Having switched their very experienced jungler for a rookie may prove to be too hard of a change to overcome, but EGA have shown the ability to defy expectations before, and I believe they have it in them to do so again. 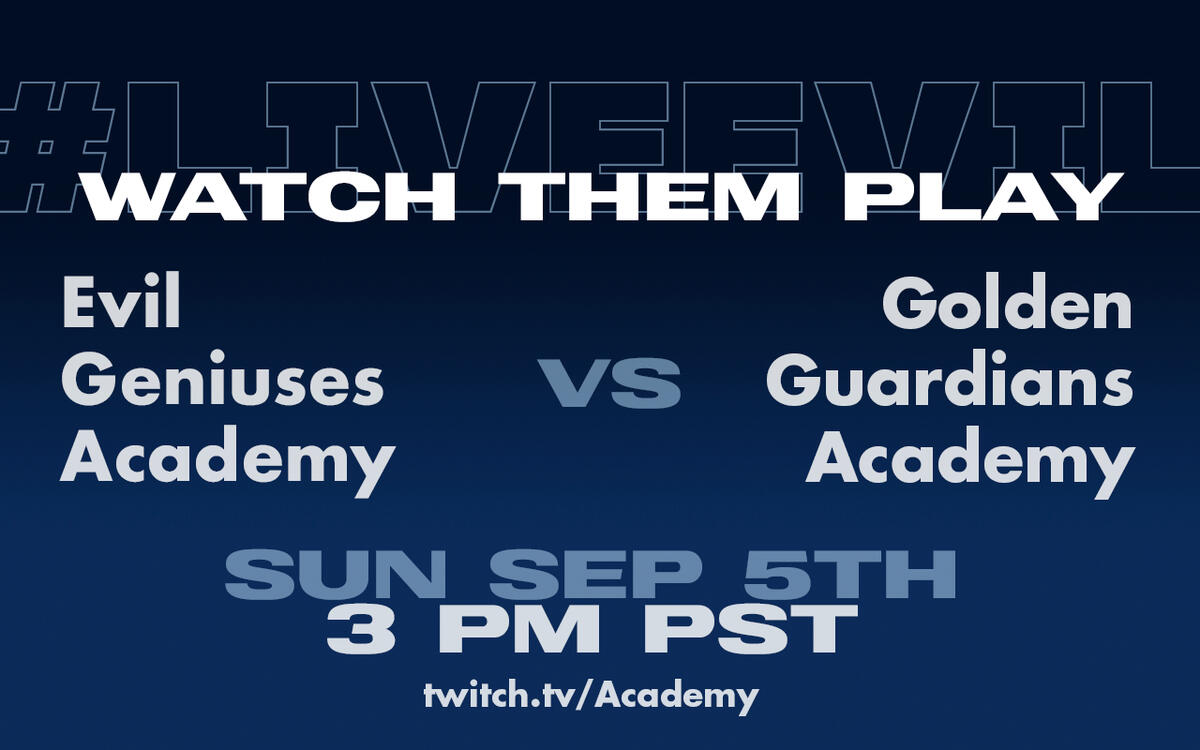 Proving Grounds starts tomorrow! Watch EGA take on the Golden Gamers on Sunday at 3 PM PST over at the Academy Twitch channel. (Or just be like the cool kids and watch the entire thing. It's a really fun tournament and you might be pleasantly surprised by it.)

Follow my friend @EGAcademyU for reminders on when and where to watch the team. (And many thanks to him for helping me hand pick some clips and giving me advice while I was working on this.)